Comparing Captive and Non-Captive Parts for Mobile and Static Applications

When selecting an anti-vibration mount, it is always important to consider what would happen if the rubber was overloaded due to improper use and the rubber were to fail. In this context, it is useful to be able to categorise mounts as either captive or non-captive. The images below show the fundamental difference between the two. 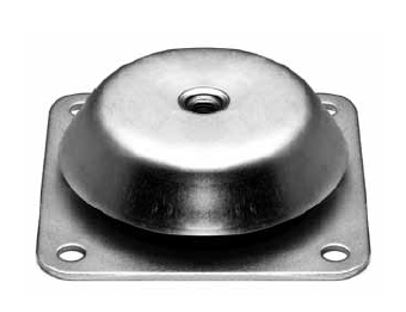 The top metal is free to move away from the bottom metal once the rubber has failed.

The top metal is prevented in moving away from the bottom metal by the internal metal ‘overlap’.

When installed, the anti-vibration mount is bolted down by the bottom plate, and the load sits on (and is connected to) the top face. In normal use, the load will produce some pre-compression in the rubber, and the vibrations will create movement of the top cap relative to the mounting plate. Mounts are selected such that the load and the vibrations do not put the rubber into tension at any time, and that there is enough clearance between any metal elements.

For non-captive parts, failure of the rubber could result in the top metal cap disengaging completely from the bottom metal plate, meaning the load is no longer tied down. For mobile applications, or where the equipment is installed at height, a loose load could cause a serious threat to safety. Therefore, in these scenarios captive mounts tend to be used, unless the design achieves captivity in some other way (see below).

For static applications, there is no real disadvantage of using captive mounts, so there is a wider range of parts available to choose from.

The following are examples of parts which, when installed correctly, provide captivity:

The following parts are examples of non-captive products:

In some cases, the best mount for a mobile application is a non-captive mount. In these cases, the customer must design the installation such that captivity is still achieved and that the load does not pose a threat to safety. The parts shown below (chevron springs and airbags) are used primarily for railway and are perfect examples of captivity by design.

In both examples, the failure of the rubber or bond will result in a fail-safe scenario where vibration isolation is compromised. Still, the system remains captive by metal-to-metal mechanical control links – thereby ensuring safety.

Should you have any questions regarding captive and non-captive parts, please contact us for further assistance and information. GMT Rubber has over 50 years of experience and industry knowledge at its fingertips, and we are happy to help you with any queries you may have.